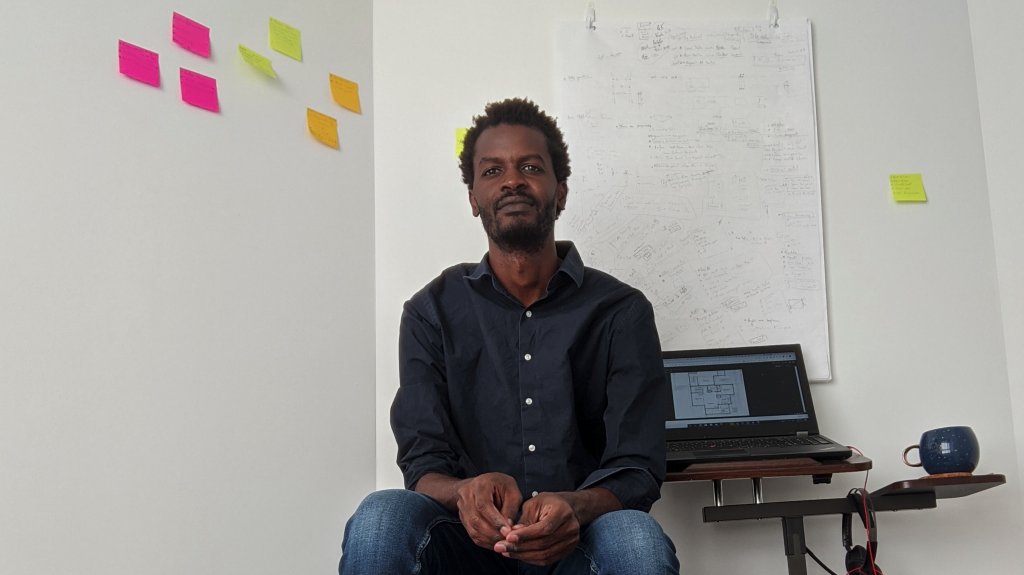 Adama Diallo grew up fascinated by the human brain. Now, at Paradigm, a maker of software for builders, he’s using artificial intelligence to map architectural spaces. Born in Mauritania, he earned a national scholarship and moved to Quebec, Canada in 2007, where he studied physics aiming for a PhD. A job teaching physics intervened, and soon his childhood fascination with AI led him to explore the subject through online courses. With a repertoire of machine learning skills and a head full of ideas of what to build, he moved from data science into AI development. Read on to learn about Adama’s projects, advice for learners, and views on bias in the AI industry.

Who inspired you while you were growing up? How did you decide to go into AI?

My biggest inspiration was Cheick Modibo Diarra, a famous NASA astrophysicist from Mali. Recruited by Caltech’s Jet Propulsion Laboratory, he played a role in key NASA programs including the Magellan probe to Venus, the Ulysses probe to the Sun, the Galileo spacecraft to Jupiter, and the Mars Observer and Pathfinder.

I have been attracted to AI since I was a student. Initially, I was interested in neurology – my high school classmates used to call me Synapse! But I found the answers I was looking for in physics.

Thinking about it, that’s probably why I’m so passionate about AI. I believe the field of AI is perfect for those who want to combine science and technology for concrete applications and are ready to spend a lot of time reading papers to stay up-to-date.

How did you become an AI developer?

Not everyone can afford or access education in traditional ways, especially in ever-evolving fields like AI. I was able to mold my career to become an AI developer because platforms like Coursera and institutions like deeplearning.ai created high-quality specializations.

In the pre-AI era, the industry generally favored people with CS degrees or those experienced in programming languages like Java. I learned to build AI models by gaining foundational ML skills online, conducting research, and practicing rigorous scientific heuristics during my studies.

How do you continue learning?

I spend at least 30 minutes a day actively reading up on state-of-the-art models in computer vision, natural language processing, generative adversarial networks, and reinforcement learning. A daily dose of clever ideas in the field has been part of my routine since 2014.

Tell us about your projects at Paradigm.

Despite my atypical educational background, Paradigm gave me the opportunity to become its first employee to work on AI-powered computer vision products. My first project consisted of identifying windows and doors from a picture using deep learning.

Right now, I’m working on wall classification on an architectural floor plan where I have to accurately classify and localize line-like objects as walls. A priori, there is no way to differentiate between the walls of a garage and the walls of a living room. The model is operational but opens further questions on spatial reasoning.

Another challenging DL project I have coming up involves using depth estimation to deduce object measurements from a picture.

What would you like to work on in the future?

I’m considering designing methods to capture relevant data without time- and labor-intensive annotation. That’s something I don’t see companies focusing on a lot, compared to modelling. I have some ideas on how to deal with unreliable data for semi-unsupervised learning tasks: you train a model on a synthesized but relatively representative data and use it as an overlay to correct and complete poorly annotated data.

Which project has been closest to your heart?

A couple of years ago, I was working at Motorleaf, a startup designing AI products for greenhouses. We used classical ML techniques to analyze climate data to forecast the yield for up to a month. As a data scientist, I decided to venture further and ended up using  LSTM. That was my first experience with deep learning.

Scientifically, you judge a model by its capacity to predict phenomena that have not yet been observed. The DL model not only gave a better yield prediction, but it also extended the forecast to three months. It was mind-blowing to see my model analyzing past and present patterns to accurately predict the future.

What problems is AI well-positioned to solve?

Human imagination is unparalleled, but the technological capabilities of AI is a close second. AI is going to revolutionize both large-scale and day-to-day activities. We already see successful applications in the medical and agricultural sectors. This positive momentum has to overcome the militarization of AI and its use in mass surveillance.

Fully automated AI-powered systems are going to be the real game-changer in the next couple of decades. I’m currently working on conceptualizing a fully automated greenhouse that would require zero human intervention, from seeding to stores. This is entirely possible with the current technology.

What are your thoughts on diversity in AI? What should AI companies be doing?

Representation is important beyond belief. We’re constantly influenced by and project ourselves onto those we see around us. In AI, like every other field, underrepresentation leads to bias that further exacerbates the issue.

When you see that most researchers and practitioners belong to the same ethnic group or gender, you’re feeding your brain without being cognizant of a biased reality. So as a decision-maker, if and when you’re hiring or deciding to invest, you’ll try to minimize the risk by deciding based on what’s familiar to you.

Historically, a lack of diversity in data has created AI models that are inherently lopsided. We simply can’t count on the goodwill of AI practitioners to overcome this bias. While I would shy away from excessive legislation, I believe industry leaders have a responsibility to set standardized metrics, perhaps similar to the F1 score, that account for ethnicity, gender, age, and so on. A biased model is a bad model, no matter the nature of the bias!

If I had to choose between working for a company with the best AI architecture or a company that had the right datasets, I would choose the latter without any hesitation. Currently, the AI companies that do well collect their data for free, but in the long run, those who spend time and effort to ensure that they have the right data would be more successful.

What advice do you have for someone hoping to break into AI?

Good online courses can be a really smart investment. Set up and complete an entire project on your own, from creating your dataset to deploying to a server. Make your assumptions and self-correct along the way as you gain experience.

Practice reading the latest industry papers. You don’t need to understand them in the first go, but you should always be thinking about how to modify the solution to make it better. Immerse yourself in AI in a way that you can cement concepts that aren’t intuitive to you. I fill up the walls of my room with equations because, even if I don’t feel like opening a book or a laptop, I can’t help but look at my walls.

AI requires both theoretical knowledge and practical application. Create your own unique learning style that helps you understand concepts and principles through your own explanations and exercises. You can learn DL architectures through state-of-the-art papers and complement your skills with practical technologies like Pytorch, Tensorflow, Google Colab, and Docker.

Adama Diallo is an AI Developer at Paradigm. You can find him on LinkedIn and Twitter.